At noon on Friday, November 11, 2022 Colonel Ward Mengel was recognized as our November 2022 Humboldt Hero!

This month only, the date of the event was changed from the last Friday of the month to Friday, November 11th, Veterans Day!

Originally called Armistice Day, it was celebrated for the first time on November 11, 1919 to commemorate the stopping of hostilities in World War I at the eleventh hour of the eleventh day of the eleventh month of 1918.

Veteran’s Day is a day to honor, recognize and thank all the heroes, men and women who have served our country in the armed forces during war or peace time. Our country gives a heart-felt “Thank you!” to each of you reading this who have either served or sacrificed in some way to keep America free! 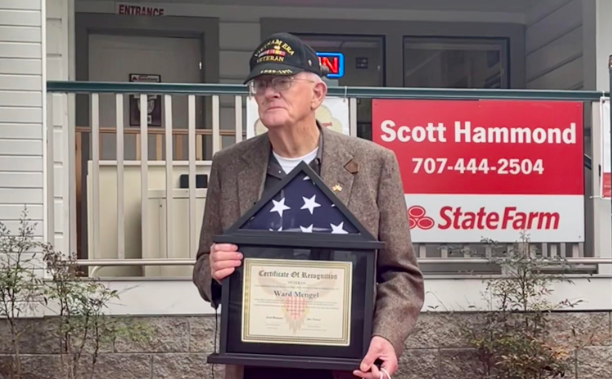 Ward Mengel is a native son of Humboldt County. He was born in Eureka on February 15, 1947 at the old St. Joseph Hospital at Trinity and F Streets. He enjoyed his time at Eureka High School, earning a letterman’s jacket by being a part of the track team. He proudly graduated in 1965.

Ward attended College of the Redwoods for two years and took advanced classes at Humboldt State College before enlisting.

On November 27, 1967 Ward joined the Marines. After making it through 10 weeks of Boot Camp at Camp Pendleton, California, he was assigned to Da Nang, Vietnam.

During Landmine Warfare School, he learned to call artillery in and spot booby traps. Because he took two years of forestry classes in high school, he knew how to read a map and a compass.

When he returned to civilian life, he married Patricia Payne and they were married for seven years. After their divorce, Ward married Christine Bergstrom. They have now been happily married for 44 years, and have one son, Carl Mengel.

The people of Humboldt are proud to recognize this local hero, who served our country bravely and with honor. We must stay humble in knowing and recognizing that we enjoy our freedoms today because of men and women like him!

“I’d like to Thank everyone here – Thank everyone that served. It’s a special day today, Veterans Day. It’s not just my day – its everyone’s day. I want to make sure everyone remembers everyone who passed this day also.” 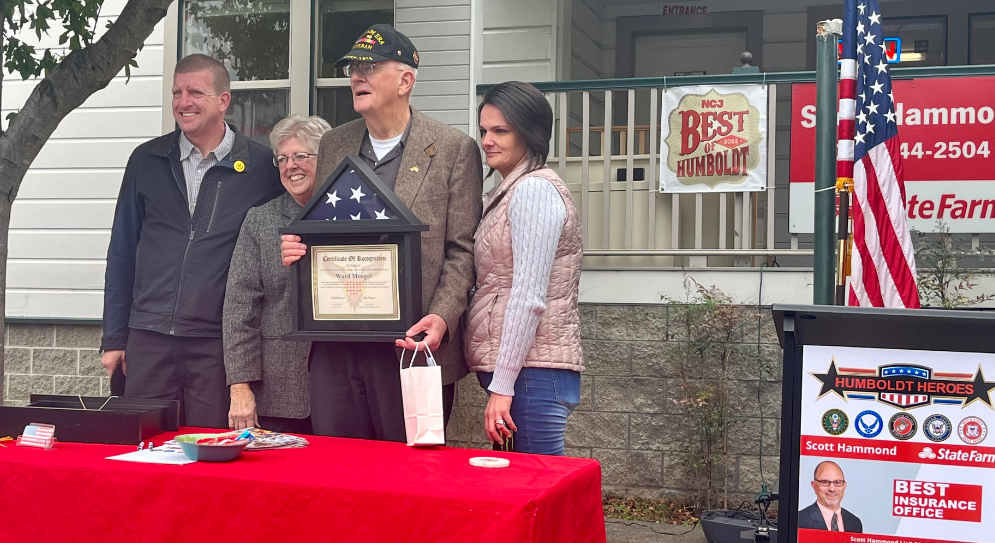 If you would like to nominate a Humboldt Hero, or if your business would like to contribute to this wonderful program, please contact Scott Hammond, State Farm Agent at 707-444-2504.

Please join us (usually) on the last Friday of each month at 573 7th Street in Eureka to honor our amazing Humboldt Heroes!